Attitude Control System for a Balloon Based Telescope BETTII

Three SRS-2000 gyroscopes was used in BETTII project. Here are some excerpts from the article on Attitude Control System for a Balloon Based Telescope BETTII:

BETTII structural model showing the location of the different sensors.

The three SRS-2000 gyroscopes used to measure the angular velocity, using Sagnac model, which offer high precision and have very low angular random walk, thus adding little noise to each measurement. These gyroscopes are exceptionally good, if we integrate the gyroscope angular velocity measurement to obtain a position estimate, the estimation error we
would make after one hour of integration would have a standard deviation of 2 arcseconds. The bandwidth is 50Hz but they can be read up to 2kHz. Additionally, built-in thermal regulators maintain the temperature within a certain range in order to maintain precision when operating at different temperatures.

The three gyroscopes were mounted in an orthogonal configuration, however because the mount could not be orthogonal to the arcsecond level we had to apply a rotation matrix in the software in order to make the measurements perfectly orthogonal. By doing this cross correlations between different axes velocity measurements are avoided. Otherwise, that would have affected the pointing estimation. 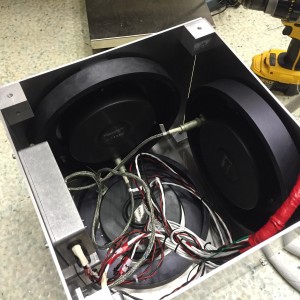 The SRS-2000 gyroscopes, mounted in an orthogonal assembly

Full article on Attitude Control System for a Balloon Based Telescope BETTII you can find here or spiedigitallibrary.org/conference-proceedings-of-spie

Fiber Optical Solution become official supplier of NASA in fiber optic navigation field. Some of our devices are now used in NASA projects.

Live chat with us

We use cookies on our website to give you the most relevant experience by remembering your preferences and repeat visits. By clicking “Accept All”, you consent to the use of ALL the cookies. However, you may visit "Cookie Settings" to provide a controlled consent.
Cookie SettingsAccept All
Manage consent

This website uses cookies to improve your experience while you navigate through the website. Out of these, the cookies that are categorized as necessary are stored on your browser as they are essential for the working of basic functionalities of the website. We also use third-party cookies that help us analyze and understand how you use this website. These cookies will be stored in your browser only with your consent. You also have the option to opt-out of these cookies. But opting out of some of these cookies may affect your browsing experience.
Necessary Always Enabled
Necessary cookies are absolutely essential for the website to function properly. These cookies ensure basic functionalities and security features of the website, anonymously.
Functional
Functional cookies help to perform certain functionalities like sharing the content of the website on social media platforms, collect feedbacks, and other third-party features.
Performance
Performance cookies are used to understand and analyze the key performance indexes of the website which helps in delivering a better user experience for the visitors.
Analytics
Analytical cookies are used to understand how visitors interact with the website. These cookies help provide information on metrics the number of visitors, bounce rate, traffic source, etc.
Advertisement
Advertisement cookies are used to provide visitors with relevant ads and marketing campaigns. These cookies track visitors across websites and collect information to provide customized ads.
Others
Other uncategorized cookies are those that are being analyzed and have not been classified into a category as yet.
SAVE & ACCEPT